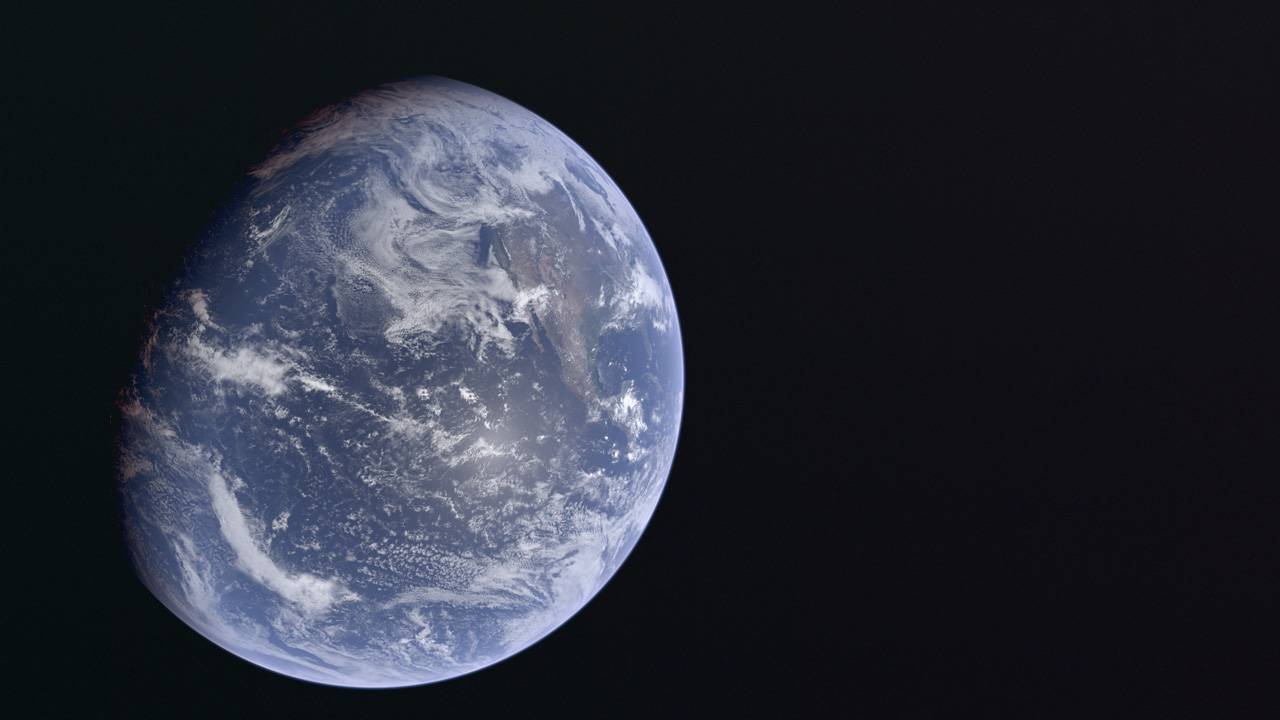 One of the most complicated shader types in cg are the earth shaders. Although there are only a few 3d spheres with textured surfaces and one sunlight you have to choose unlimited opportunities to design a performant, realistic and detailed scene of the earth, the moon and the sun. There are many different techniques and material properties to design an earth surface model – realistic or abstract. I’ve created a photorealistic earth & moon shader for V-Ray Renderer based on the NASA Blue Marble Earth Maps. You can download this models here.

I was working over for a half a year for an earth shader model that let you make good close up renderings in low orbit. For better handling and some performance issues I’ve decided to split the surface shader into three main shaders (ocean, lands and nightlights) and three objects (earth surface, clouds and atmosphere) with different sub shaders, map and dependencies. The base of my shader is an ocean material. It is very hard to determite the correct color of water. The distinctive blue of the water caused by the reflection of the sky. A combination of other blue and green tones produced by algae, salinity and water depth. I have developed a shader that modifies the colors according to water depth and perspective. Reflections are traced by the sun, clouds and atmosphere. The blur of the reflected water depends on the perspective and the strength of wind because it disturbs the surface of water and create different shapes of waves. Much more complex as the ocean shader are the land surfaces. The earth surface dramatically changes its color in the morning or evening sunlight into red and orange. The height of the solid surface of the earth is controlled by a V-Ray displacement without any bump texture. A very important value is the correct displacement amount and the huge map resolution. I used the “Blue Marble” color textures of the NASA Visible Earth Website and scaled down the extremely high resolution (500 m) maps down to 1 km, so a computer with 16GB of RAM could render the scene without swapping onto hard drive. My coastline mask that separates the ocean shader from the land surface was kept in 500m resolution with an 8-bit gray-scaling, so that a more powerful PCs could load and render the 500m-textures of MODIS again. So the “Blue Marble” textures of the different seasons are available for download and ready to use in my shader. In addition to the land mass and the oceans the white clouds are a characteristic feature of our planet’s face. Huge high and low pressure areas surrounding the northern and southern hemisphere are generating clouds in different forms and heights. I’ve used the MODIS cloud maps with 42k (2 x 21k) resolution and repainted many artefacts, map borders and clear areas by hand. The city lights at the nightside of the earth lighten the the back surface of the clouds and glow a little bit. So the cloud shader consists of some V-Ray-Light-Materials and the cloud material itself. Unfortunately there is no way to render volumetric clouds, so all earth shaders depends on the quality and resolution of the displacement and opacity map. The terminator is a moving line that separates the illuminate day side and the dark night side of the earth. On it’s way through the atmosphere, light is refracted and scattered, making it a result of refraction by about a half a degree then recread a wider area of the earth’s surface and occure because of the scatting besides the twilight zone. So the terminator on the night side is smaller and blurred than on the day side. A small part of the light is reflected from the illuminated surface known as diffuse reflection and depends on the surface conditions and the angle of incidence. In my earth scene the terminator is a sun orientated separate object which pierces the earth body, because there is no exact light/shadow falloff shader type in V-Ray. In its area there is a gradient color mask for dusk and dawn. Figure 5 – Terminator over gulf of mexico (rendered with 3ds may and V-Ray, Auto-Contrast in Photoshop)

The Earth in 3D Figure 6 – Moon (rendered with 3ds may and V-Ray, Auto-Contrast in Photoshop)

This site uses Akismet to reduce spam. Learn how your comment data is processed.